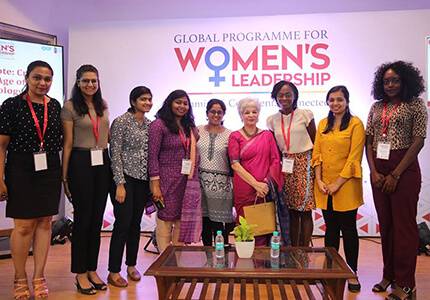 Confidence. Commitment. Connectedness. Courage. Here at The Vedica Scholars Programme for Women, these four values (called the 4 Cs) comprise the crux of what we impart to our Scholars, and nowhere were they better exemplified than at the Global Programme for Women Leaders (GPWL). The first edition of the GPWL was held this year, in partnership with the Observer Research Foundation (ORF) and supported by the United Kingdom’s Department for International Development. This is a global platform bringing together 90 young women leaders from diverse backgrounds to exchange ideas, experiences, and solutions to pressing challenges, especially in the healthcare, technology, and sustainable development sectors. The aim of the conference can be put thus: to ensure that every GPWL Fellow feels inspired enough to commit, uncomfortable enough to make a difference, informed enough to act, confident enough to lead, and connected enough to succeed.

The seven-day conference was hosted in New Delhi, India from April 8th to April 14th, 2019. It brought together 60 Vedica Scholars from India and 30 international Fellows from various African countries including Botswana, Nigeria, South Africa, and Kenya, and from countries in the Bay of Bengal Community like Bangladesh and Nepal. The Fellows selected were from diverse backgrounds, such as law, medical sciences, economics, humanities, health, environment, communications, and gender.

The conference consisted of discussions, field trips, mentoring sessions, theatre workshops, and cultural immersion activities, all geared towards providing exposure to the young women attending, and thus preparing them for impactful leadership positions. It is fitting to categorise all these events on the basis of which of the 4 Cs they serve.

Confidence-building sessions included those on the importance of self-awareness and introspection, led by the likes of leadership development professional Avik Chatterjee and educationist Gowri Ishwaran. In keeping with the Socratic exhortation, the Fellows embarked on (often emotionally charged) adventurous paths to learn more about themselves and accordingly present their best selves to the world. The Fellows also benefited greatly from a number of speed mentoring sessions that dealt with how to build an authentic personal brand in the professional world.

There were numerous sessions centred on Commitment and change-making. NGOs like The Akshay Patra Foundation and Goonj organised field trips that gave the GPWL Fellows an intimate glance at the workings of the social sector in India. The conference saw multiple workshops focussing on mantras for professional success and models for creating impact.

Connectedness was an important buzzword throughout the conference, and came out most strikingly in the keynote address delivered by activist and feminist scholar Kamala Bhasin, in which she talked of the importance of women supporting women in all spheres of activity. The Fellows enjoyed various expert-led sessions tailored for sector-based groups, and gained insight regarding the importance of accessing the right opportunities and funds. Social media connectivity was a point of focus in multiple sessions; most notably in a workshop facilitated by award-winning journalist Barkha Dutt that equipped the Fellows to communicate their ideas coherently and effectively through social media. Communication via storytelling became a talking point thanks to speaker Raghu Raman, who conducted a highly interactive session on the same. Keeping in mind the necessity of grassroots development, the Fellows attended a workshop that discussed how to support cottage crafts in the age of scalability.

Fittingly, the 4th C--Courage--was beautifully rendered using different mediums of expression: from theatre and dance to poetry and music. The Fellows were moved by theatre workshops dealing with themes like pushing one’s boundaries despite being situated in an oppressive setup. A talk by author Urvashi Butalia on making feminism relevant to one’s own particular struggle was heavily attended, as was a session by author and columnist Monika Halan on ensuring one’s financial independence as a woman.

The GPWL seeks to create a network for potential women leaders all over the world to inspire each other and work collaboratively across sectors and issues. Solidarity and support were evidently the order of the day at the first conference; a refreshing counter to the old boys’ club culture that plagues the management sector at large. The GPWL conference had a transformative impact on the Fellows who participated, providing them with a welcoming space for meaningful conversations and positive action. There is no doubt that the conference kick-started a new era of support and solidarity among the attendees; all brilliant young women who are set to be the movers and shakers of tomorrow.