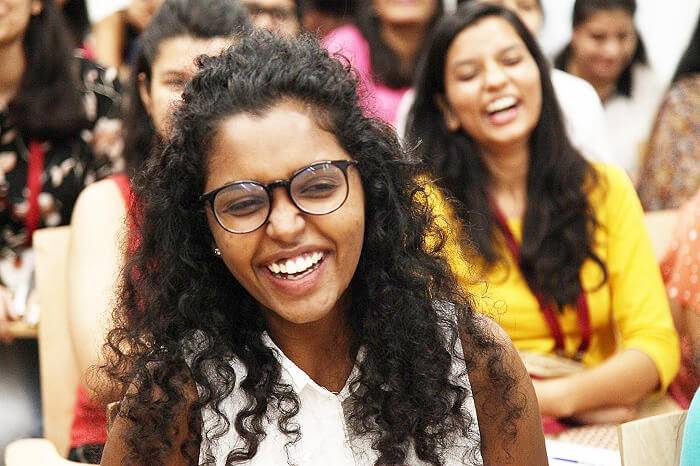 Battling through confusion brings clarity, through conflict rises character. That’s certainly true of our fifth batch Scholar, Sharon Ann Robson. After scoring a 96% aggregate in her 12th grade, the Cochin girl chose to study Economics at St. Xavier's College, Mumbai. Unfortunately, her confidence took a beating as efforts for UPSC didn’t bear the results she had hoped for.

Then there was the conflict due to gender gap in the workforce to contend with. The striking feminist shines in her through as she illuminates subtle patriarchy in Kerala, which we often see as the most liberal state in the country. “Kerala is a very literate and aspirational state, so women are exceptionally educated but very few of them are in the workforce. There might be more women in colleges but the teams are led by men, and you see the same in the professional sphere,” she says with frustration palpable in her voice.

So when she heard about the Vedica Scholars Programme for Women, she knew she had found a way to channel her angst constructively to make her way to the top. Talking to her friends, who were part of the programme helped her gain clarity on what to expect. Though she wasn’t set on a specific career path for herself, she knew she would be offered varied opportunities to realise her true potential. The ‘Shadow A Woman Leader’ module is just one of them. She tells us why she made the decision, which has reinstilled her self-confidence.

You did your due diligence by speaking to friends before enrolling for the programme? What was the aspect of the programme that struck you at first?

It has to be the curriculum, which has a very holistic approach. It has the Liberal Arts element, a communications centre, as well as management learning and on-field experience. When I spoke to my friends about the programme they spoke very highly of it. That helped me make my decision to come to Delhi.

Since you come from Kerala, was moving up North a challenge for you?

I can see more and more women in Kerala want to be in the workforce. Yes, studying in a residential programme seemed like a challenge, but I saw it as an opportunity. It’s a demanding schedule and you know living here helps you get your work done. And honestly, it’s not just me going through the experience, but everyone around me as well.
Studying in an all women’s environment is working out well for you then?
Firstly, the group projects are easier because we can all meet at 10pm or 12am, whenever we want to. There is a lot of strength that can be drawn from shared experiences as well. If there are any challenges, we are facing them together. I have seen that even in some of the liberal colleges, student committees are led by men. The same pattern carries forward even in professional setups.
So you must be looking forward to the ‘Shadow A Woman Leader’ module?
Yes, you could be a part of a research programme or an internship; you will often be working under men because they are in charge. But when I first heard about the module, it immediately appealed to me because it was one-of-a-kind opportunity to learn from the experiences of successful women. You can relate to them, identify with them, and at the same time feel empowered and confident.
Apart from your improved confidence, how is the programme helping you in working towards your professional goals?
I believe choosing a career path after graduation can be a daunting proposition. You don’t want to make a choice and miss out on something else. The Vedica Scholars Programme is giving me a full platter of opportunities to explore my talents in many ways. It is giving me exposure to several professional aspects so that I can make an informed and discerning choice for a successful career.
Apply Now
Request Callback
Invite Vedica to your College
Recruiters Connect
eBrochure
Whatsapp