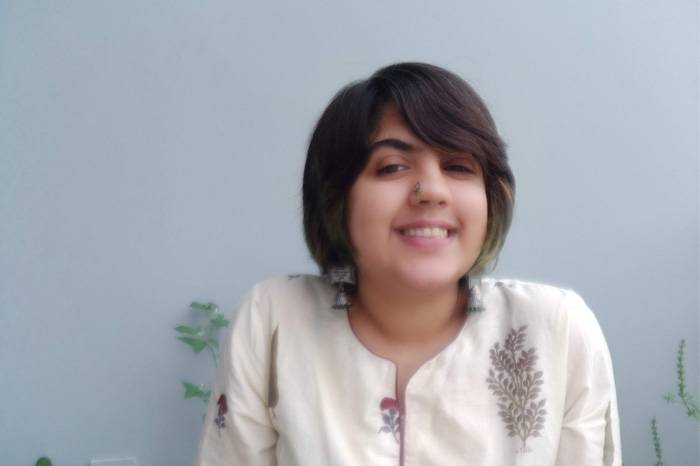 With her eyes set on leadership roles in the corporate world, Vedica Scholar Ojas Khurana has been grooming herself for the challenges at the workplace, mimicking real life work environments. She claims only to have had a vague idea of what corporate life would be like till her Shadow A Woman Leader module began. “I had always imagined what kind of work I would like to do and where. By the end of the module I was sure what it would feel like. The challenge, excitement and creativity in Hogarth work culture allowed me to articulate my ideal work environment better,” she says assuredly.

Proving herself with the global creative production company trying to make  its presence felt in India was a challenging prospect. The  module going online due to the ongoing pandemic added to that challenge, however, Ojas tells us that she felt confident in her abilities because of her preparations for the module. “We had a nice mix of online and offline work. I got to witness some meetings and work happen in person while I did most of the work on my projects online. After a few initial hiccups it flowed quite smoothly once we got a rhythm of communication down,” she says looking back on the experience.

The highlight was rubbing shoulders with none other than Gopikaa Davar, CEO, Hogarth India. Ojas knew that it was a tremendous opportunity and grabbed it enthusiastically. She describes shadowing her mentor as a deep dive into the kind of work she always thought would be interesting. “She facilitated my shadow such that I got to learn from her, her teams and the work culture at Hogarth. Continuous learning and creativity melted into one another as people around me worked to present new ideas to clients, learnt new AI tools, prepared for big pitches, discussed new business avenues and so much more,” she adds enthusiastically.

As a part of the module, Ojas worked in two teams on two projects – a B2C product launch and a B2B project. She also presented her ideas for PR to help Hogarth to create a presence for itself in India, like it has in other countries. However, her biggest learning was observing and learning from her mentor’s leadership style. “I think her leadership style can be described as sharp, empathetic and powerful. She always inspired people on her team to keep innovating and doing better, encouraged new learnings and appreciated creativity. Whether it was planning the big picture or pointing out little pieces that needed more attention, nothing slipped by her,” she says, inspired.

Overall, the experience allowed Ojas to see a real version of the kind of workplace she had always imagined fitting into. And just like her mentor Gopikaa, she feels ready to take on any challenge that comes her way. She has also converted her learning into strategies that she will rely on in the future. “I have realized that great ideas on their own are not enough for great impact. Attention to detail and foresight must be balanced to manage diverse teams and skillsets. Initiative is good and appreciated, but if you bite more than you can chew, it always shows,” she concludes. Ambitious and pragmatic; we see a distinctive leadership style forming.